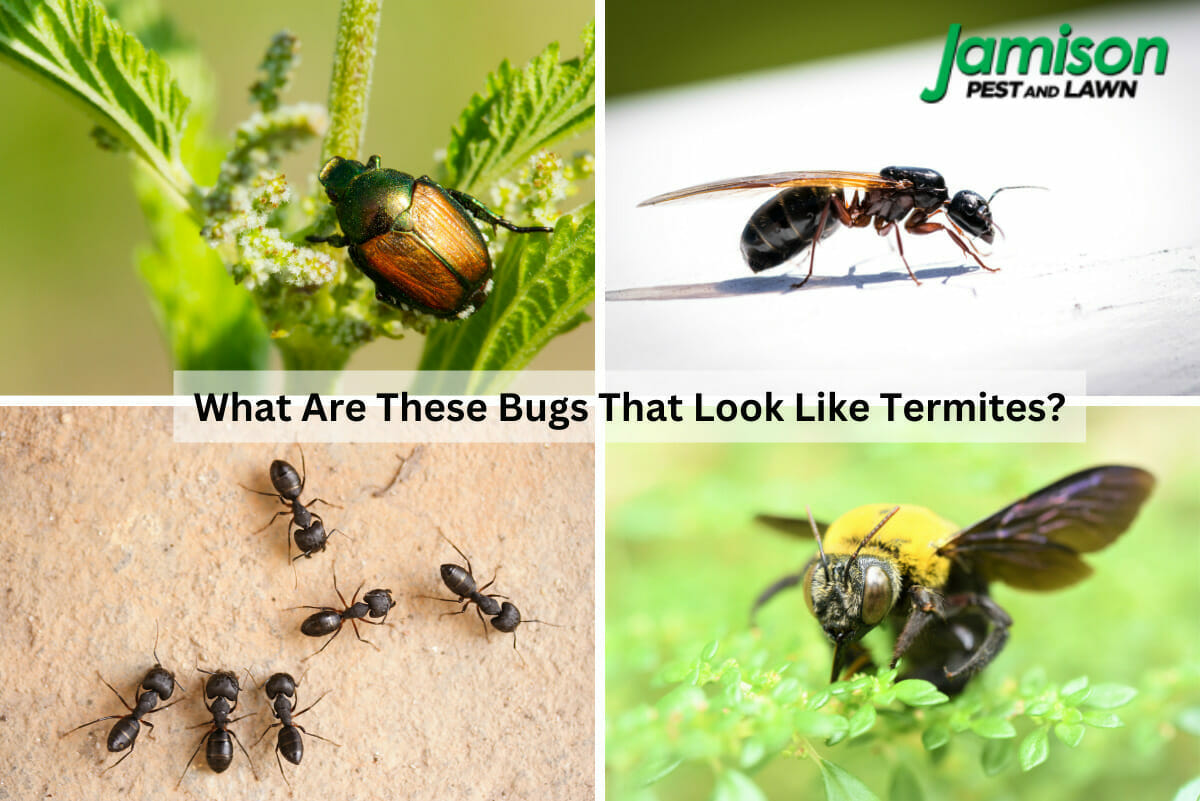 Termites are small, winged insects that can cause significant damage to structures if left unchecked. They are often mistaken for other types of bugs, which can lead to misidentification and inadequate treatment. In this blog post, we’ll explain the different types of bugs that look like termites and how to identify them correctly. We’ll also discuss the critical differences between these insects and termites, and provide tips for identifying and dealing with termite infestations. Whether you’re a homeowner, landlord, or pest control professional, it’s important to distinguish between termites and other insects to effectively protect your property from damage.

Termites are tiny insects that feed on wood for survival. They are brown or cream-colored and are one of the most destructive pests homeowners can encounter.

They are social insects that live in colonies and are known for their ability to consume and digest wood, which they use as a food source. There are many species of termites prevalent in the world, and these pesky creatures are found on every continent except Antarctica. You can commonly find them in certain warm, humid environments as they thrive in moisture and darkness. However, some species of these pests are adapted to live in dry, arid regions. In the United States alone, termites can create damage worth up to billions of dollars in a single year.

Why Knowing The Pest You’ve Encountered Is Necessary

Now that we know what termites are, and what they look like, let us move to another part of the section.

There are over 40 species of termites commonly found in the U.S., along with thousands of other insects that plague homes. Some are more dangerous than termites, while some are harmless. Knowing the type of pest you’ve encountered is important so that you can get the right treatment service.

Let us look at the five most common pests or bugs that look like termites:

Flying ants are also known as alates or swarmers. Flying ants are usually black or brown and about 1/8″ long. They have three sections: the head, thorax, and abdomen. The head has two antennae that are longer than the body.

The majority of homeowners are concerned about flying ants, which they commonly mistake for termites due to their similar appearance and behavior. Both insects have wings and are often seen flying around structures. However, there are several key differences between the two insects.

The ants can be distinguished from termites by their narrow waist and the presence of “elbowed” antennae. Termites only have straight antennae and a broad waist. If you are unsure what type of insect you are dealing with, it is always a good idea to consult a professional entomologist or pest control expert for assistance. 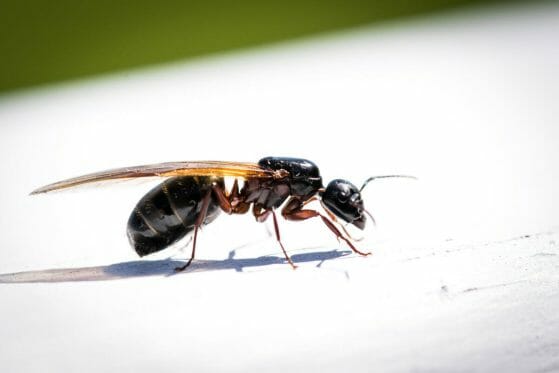 Another class of bugs that look like termites is carpenter ants. They are called so because of the way they carve tunnels in wood to move and build their nest. Carpenter ants are the most common type of wood-eating ant. They are large, black insects with orange or yellow-colored legs, and have a segmented abdomen. They can be identified by their large heads and antennae, which are about as long as their body. Carpenter ants usually live in moist, decaying wood and feed on other insects.

Both termites and carpenter ants eat or rather destroy wood. However, they are not known to eat wood. They both come in colonies and they both swarm during the mating process. A winged carpenter ant can be mistaken for a termite swarmer. 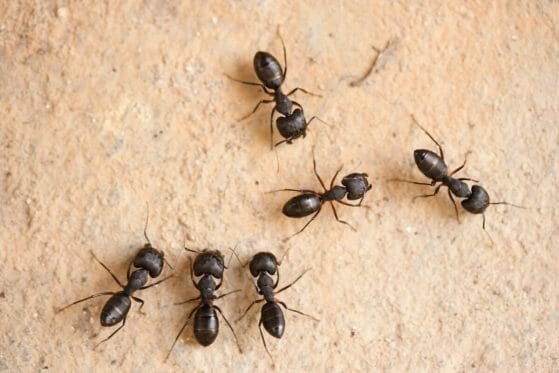 How Do Carpenter Ants Differ From Termites

Carpenter ants can resemble termites due to their elongated bodies. However, there are several differences.

Acrobat ants are also known as the species Crematogaster and are one strong insect.

Acrobat ants are a type of ant that get their name from their habit of raising their abdomen over their thorax and head in a manner similar to an acrobat. They are small to medium-sized ants, typically black or dark brown in color, and have slender, elongated bodies.

Acrobat ants are found throughout the United States and are known for nesting in various locations, including trees, logs, and the structural wood of buildings. They are also known to be attracted to sugary substances and will often invade homes in search of food.

Generally, homeowners can confuse them for wood termites because, like termites, the acrobat ants also leave frass (excretion and debris) around the wood they’re destroying. If you see small piles of frass around your wood trims, it’s time to call an exterminator. 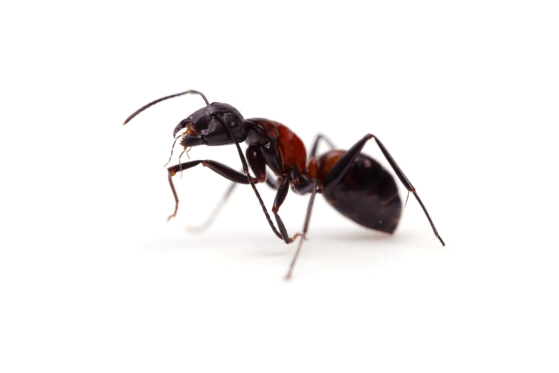 How Are Acrobat Ants Different From Termites?

Acrobat ants are quite different from wood-eating termites. Let us look at some of the differences.

Powderpost beetles are a type of wood-boring insect that can cause damage to buildings and other structures made of wood. They get their name from the fine, powder-like frass they leave behind as they tunnel through wood.

If we consider their appearance, then the powderpost beetles are not very similar to termites, apart from the fact that they are dark and have six legs. However, you may confuse them with termites as both of these insects have a similar style of work. Both insects are also capable of causing damage to wood, and they can leave behind similar signs of infestation, such as small holes in the wood and piles of frass.

Signs of a powderpost beetle infestation include small, round holes in the wood, piles of frass, and the presence of adult beetles.

To control a powderpost beetle infestation, removing any infested wood and treating the remaining wood with a wood preservative is essential. Hiring a professional pest control service may be necessary in severe cases to properly eliminate the infestation. 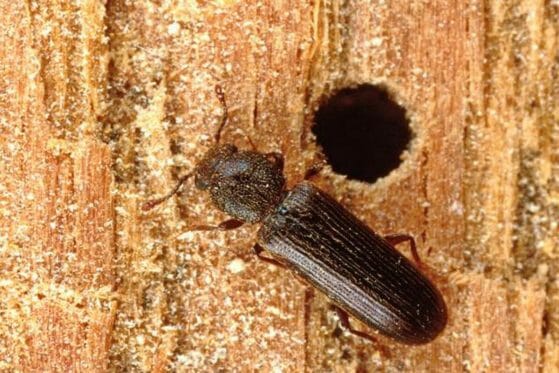 Carpenter bees and termites may appear similar at first glance, as they are both small insects that can create holes in wood. However, there are several key differences between the two that can help you distinguish them.

One of the most obvious differences is the size of the insects. Carpenter bees are typically larger than termites, with adults ranging in size from about a 1/2 inch to 1 inch in length. They are also chubby and fuzzy in appearance, similar to bumblebees. On the other hand, termites are typically smaller, with workers ranging in size from about 1/4 inch to 3/8 inch in length.

Another key difference is their behavior and habits. Carpenter bees are independent insects that do not live in colonies, while termites live in large colonies and work together to build and defend their nests. This means that it is more common to see a single carpenter bee at a time, while termites are typically found in large numbers.

Facing A Termite Infestation? We Can Help

If the infestation is severe, or if you are unsure how to effectively control it, it is a good idea to contact a professional pest control service for assistance. Termite professionals have the knowledge and experience to identify and treat a termite infestation properly.

At Jamison Pest and Lawn, we know that pests can be stressful, especially when they start to affect your home or business. That’s why we have a team of experienced professionals ready to help you get rid of your infestation. We offer professional termite control services in Tennessee and Mississippi to effectively identify and treat the infestation so that you can get your home back from termites.

With the knowledge and experience of our team of experts, we can help control the infestation and protect your home or property from further damage. Don’t hesitate to contact our company at (901) 452-1505, for assistance in dealing with a termite infestation.

Termite Damage Vs Wood Rot: What's The Difference And How Do You Fix It?
Top 10 Termite Exterminators In Memphis, TN
Do Termites Bite People, Or Are They Harmless?